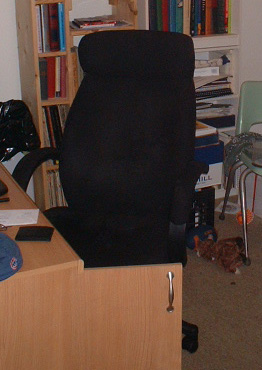 Since I have Jamie's digital camera again I figured I'd take a break from my score editing to snap a few more pictures. You can see my new suede throne and man, it is way more comfortable than it looks. I broke it in today with a little nap. What kind of good office chair can't you nap in? That's probably why we don't have them at work.

I went to Tallahassee Nurseries today to get a couple more plants since all the ones in my room have died except for my lemon basil one. I was on my way out when who do I run into? That asshole lawyer-turned-art history-grad student from my German class. He was the one that stole Bobbi (The All-American girl) from Alex so I hated him going in. First off, his name is Segundo. Although I do not have a degree in Spanish, I can't help but wonder if his older sister is named Primera. What kind of family names their kids by the order they were born (Segundo = Second, by the way). Anyway, the reason I hated him in my German class was because we'd have to read paragraphs from the book aloud. If there was a word the author didn't think we'd know, there'd be an asterisk by it. It was something like this:

So someone in the class would be reading and as soon as they got to a starred word, Segundo would shout it out as if he was so far along in his German studies he already knew that Kohl was cabbage or Steinschloß was stone castle. Of course he pissed everyone off in the class by doing this since obviously we all looked forward to the starred words because we were guaranteed to get at least a couple words out of the paragraph right. One night I was in a particularly bad mood and got called on to read a passage about music, since there were only eight of us in the class and we were all grad students in something other than German our teacher knew all of majors. I was happily reading about Bach when *bam* harpsichord.....*bam* performances....*bam* organ pedals. I couldn't take it anymore. I turned (he sat right next to me) and told him to shut up using no uncertain terms. I informed him that we all hated him and that he was proving nothing to us by reading the words from the bottom. Then, for what seemed like at least 20 minutes (probably more like 20 seconds but still) there was complete and utter silence. I broke the silence by finishing my story about Bach's kids.

Jump ahead a couple of years. So I'm at Tallahassee Nursery carrying my tray full of expensive plants. Since I was on my way to City Hall I was wearing a pair of dress pants and a nice shirt. This guy stops me out of nowhere and asks me all the questions about plants and where plants were and how much sun they get and all this other stuff. He looks very familiar but I can't place him. I inform him that I don't work here and he just kind of grunted that "huh" (like Mark Connor used to do) and walked away. When I made it to the car it hit me--it was Segundo!

I hope you one day read this you old bastard. First off, you're in your 50s and you married a girl that's the same age as your daughter. THEN you have a baby! Sure, you were a rich lawyer wearing your Rolex but you gave it up to become an art historian. Good for you. Thank God the academic process is so long you'll be dead before you ever get a job. I hate you even more for being in your mid-50s with a full head of hair.

There are no comments yet 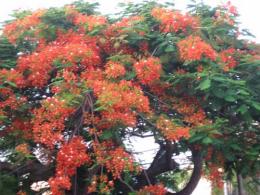 These flowering trees were everywhere. Turns out the red is new leaf growth and not actual flowers.